Today I decided to let the kids stay home even though it’s not an “official snow day”. I mean, it is snowing, and blowing, and the roads are crappy according to my hubby who called to tell me I should just let the kids stay home today and save myself the 30 minute drive (each way), because it’s likely to be a lot longer than that. I wasn’t sold on the idea of letting them stay home initially, mainly because I was already up and showered and dressed, and one of my two daughters was up and dressed (the other daughter, still in bed). It would’ve been an much more appealing idea, I’m sure, if I was still snuggled in bed in my jammies and hadn’t already gotten myself and the girls up and moving (well, the one daughter, anyway, as I said, the other was still snuggling in bed). The real kicker is, I anxiously waited to hear if the buses were cancelled on the news before I got out of bed this morning, hoping to avoid the whole getting-up-and-moving thing. Only to hear Kevin Frankish on Breakfast Television say, “sorry kids, the school buses are all running this morning.” Sorry kids?? If he only knew how his words affected me this morning, never mind the kids, who at that point were still sleeping snug in their beds. Needless to say, I did the right thing after hearing that buses were indeed running, and woke the kids up and got into the shower myself, however begrudginly.

I was in the kitchen, getting the kids’ lunches packed when hubby called to tell me how the roads were. I was leaning towards taking the girls to school anyway, as I turned to see my oldest daughter coming down the stairs. I repeated the news to her about the roads and she was immediately sold on staying home. What kid wouldn’t be? So then I had the following conversation with myself in my head, “ah, what the heck…Emily isn’t even out of bed yet anyway…and it does look crappy out…but then I have to call the school and tell them that the kids won’t be in…what will I say?…that I’m keeping them home based on hubby’s road report, even though the buses are running?…and I know the one teacher does almost the same drive we do so if she can make it, we should be fine, besides, she’ll probably answer the phone when I call and then what will I say?…will that make me look like a wimp? Or should I tell them that Syd isn’t feeling well, because she is stuffed up…but how do I explain Emmy staying home? Maybe I’ll just say that they won’t be there today and not offer any explanation?…do I or don’t I?…take them anyway, or just let them stay home…?” and  then I start wondering, why on earth do I have to have this entire conversation with myself to begin with? Why is it that there are times when a decision is made and that’s that, but other times, you go around and around and around, unable to settle on a decision, one way or the other?

Long story short, I called the school and spoke to the teacher (yes, the one that does almost the same drive and who, when I asked how her drive in was, said that it wasn’t actually too bad). I mentioned my conversation with my hubby and his road report, and the kids’ subsequent decision to “opt out” of school today, which was probably best because Syd sounds congested anyway, (I had to throw that in as my feeble attempt to retain a shred of parental responsibilty…). The teacher laughed and said “okay, no problem.” I’m sure she was thinking, “the kids’ decision?” Come to think of it, she was probably laughing at me, and not with me.

On a final note, the snow is still coming down, piling up and blowing around, soft and white and beautiful. The kids are happy to be home, one eagerly coming up with gift ideas for the family we’re sponsoring this year through the local newspaper, and the other…still in her pj’s, looking for breakfast. And me, I’m quite content to be sitting at my desk, typing away with Much Music on in the background (compliments of my oldest daughter), this morning’s indecisiveness long behind me as I enjoy this “unofficial snow day” with my two beautiful daughters… 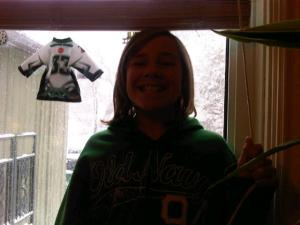 I’m Jen and I’ve been a people watcher all my life. I was an extremely shy child and a socially awkward adult and I’ve always been curious about what makes people tick. I’ve grown from  shy introvert to firefighter to coach and speaker. Now I help other wanderers achieve the same empowerment in their own lives.